KMM uses the multiplatform abilities of Kotlin and the features designed for mobile development, such as CocoaPods integration and the Android Studio Plugin.

You may want to watch this introductory video, in which Kotlin Developer Advocate Ekaterina Petrova explains in detail what Kotlin Multiplatform Mobile is and how you can use it in your projects. Together with Ekaterina you'll set up an environment and prepare for creating your first cross-platform mobile application with KMM.

What is the KMM plugin?

The Kotlin Multiplatform Mobile (KMM) plugin for Android Studio helps you develop applications that work on both Android and iOS.

With the KMM Plugin, you can:

The KMM plugin works only on macOS. This is because iOS simulators, per the Apple requirement, can run only on macOS but not on any other operating systems, such as Microsoft Windows or Linux.

The good news is that you can work with KMM projects on Android even without the KMM plugin. If you are going to work with shared code or Android-specific code, you can work on any operating system supported by Android Studio.

What is Kotlin/Native and how does it relate to KMM?

Kotlin/Native is a technology for compiling Kotlin code to native binaries, which can run without a virtual machine. It consists of an LLVM-based backend for the Kotlin compiler and a native implementation of the Kotlin standard library.

Kotlin/Native is primarily designed to allow compilation for platforms where virtual machines are not desirable or possible, such as embedded devices and iOS. It is particularly suitable for situations when the developer needs to produce a self-contained program that does not require an additional runtime or virtual machine. And that is exactly the case with iOS development.

Shared code, written in Kotlin, is compiled to JVM bytecode for Android with Kotlin/JVM and to native binaries for iOS with Kotlin/Native. It makes the integration with KMM seamless on both platforms. 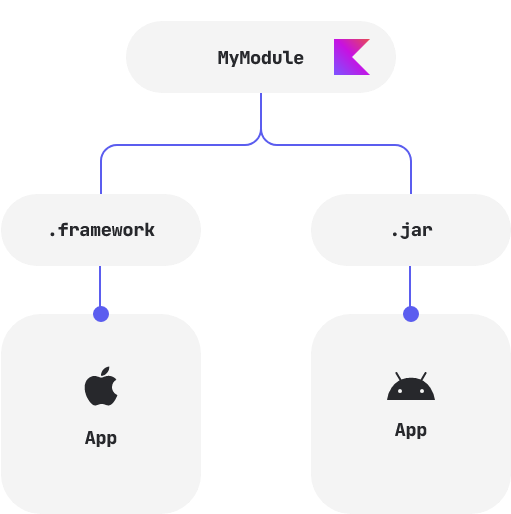 What are the plans for KMM?

KMM is one of the focus areas of the Kotlin roadmap. To see which parts we’re working on right now, check out the roadmap details. Most of the recent KMM changes affect the Kotlin Multiplatform and Kotlin/Native sections.

Can I run an iOS application on Microsoft Windows or Linux?

If you want to write iOS-specific code and run an iOS application on a simulated or real device, use a Mac with a macOS (use the KMM plugin for it). This is because iOS simulators can run only on macOS, per the Apple requirement, but cannot run on other operating systems, such as Microsoft Windows or Linux.

If you are going to work with shared code or Android-specific code, you can work on any operating system supported by Android Studio.

Where can I get complete examples to play with?

In which IDE should I work on my cross-platform app?

How can I write concurrent code in KMM projects?

You can learn how to work with concurrency on the documentation portal.

How can I speed up my KMM module compilation for iOS?