This tutorial demonstrates how to use IntelliJ IDEA to create a command-line application. You'll learn how to create a simple HTTP client that can run natively on specified platforms using Kotlin/Native and the libcurl library.

The output will be an executable command-line app that you can run on macOS and Linux and make simple HTTP GET requests.

While it is possible to use the command line, either directly or by combining it with a script file (such as a .sh or a .bat file), this approach doesn't scale well for big projects with hundreds of files and libraries. In this case, it is better to use the Kotlin/Native compiler with a build system, as it helps download and cache the Kotlin/Native compiler binaries and libraries with transitive dependencies and run the compiler and tests. Kotlin/Native can use the Gradle build system through the kotlin-multiplatform Plugin.

IntelliJ IDEA will create a new project with the files and folders you need to get you started. It's important to understand that an application written in Kotlin/Native can target different platforms if the code does not have platform-specific requirements. Your code is placed in a folder named NativeMain with its corresponding NativeTest. For this tutorial, keep the folder structure as is. 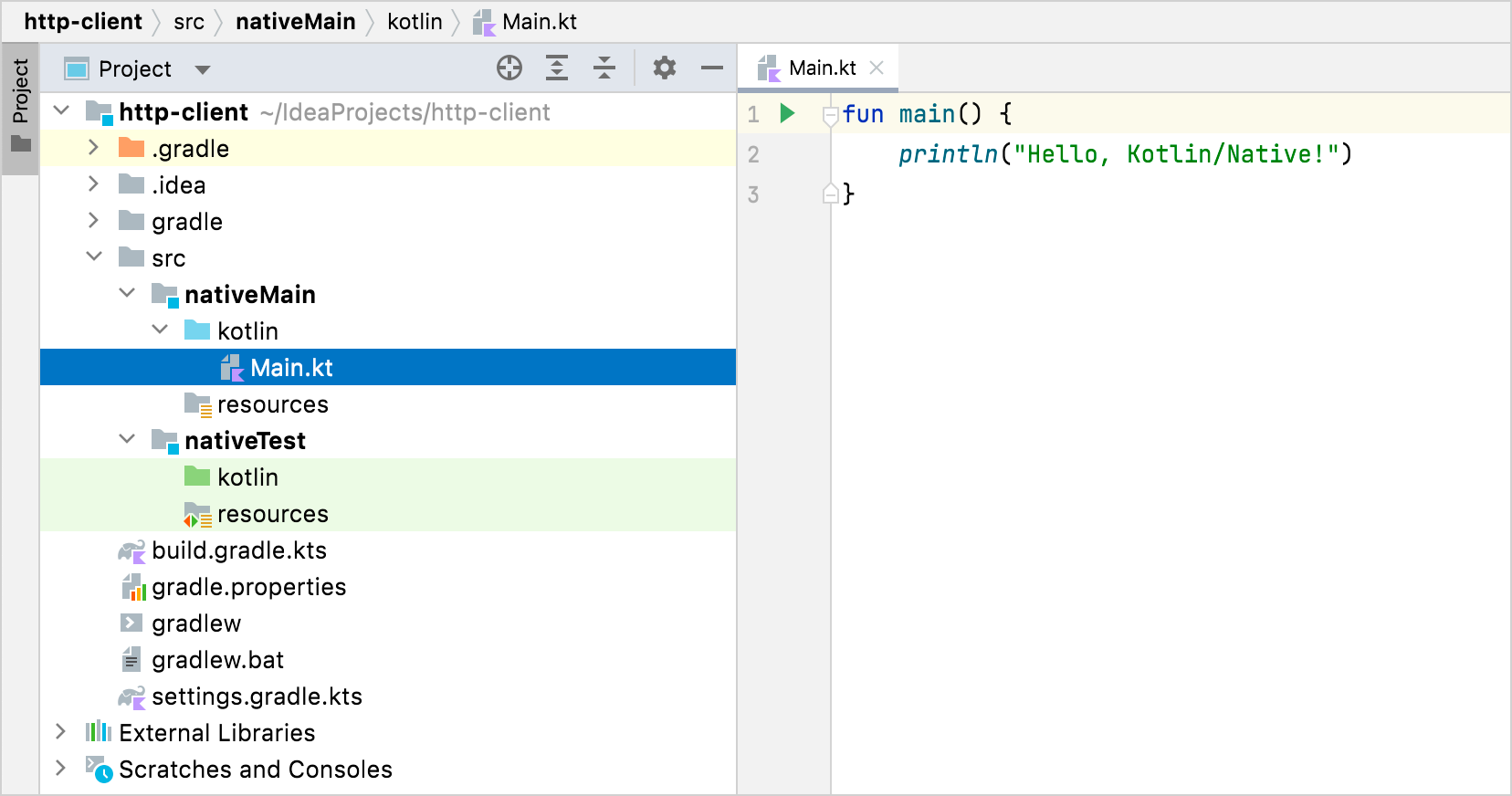 Along with your new project, a build.gradle(.kts) file is generated. Pay special attention to the following in the build file:

When writing native applications, you often need access to certain functionalities that are not included in the Kotlin standard library, such as making HTTP requests, reading and writing from disk, and so on.

An ideal scenario for interop is to call C functions as if you are calling Kotlin functions, following the same signature and conventions. This is when the cinterop tool comes in handy. It takes a C library and generates the corresponding Kotlin bindings, so that the library can be used as if it were Kotlin code.

To generate these bindings, create a library definition .def file that contains some information about the necessary headers. In this app, you'll need the libcurl library to make some HTTP calls. To create a definition file:

The convention is that each library gets its definition file, usually with the same name as the library. For more information on all the options available to cinterop, see the Interop section.

You need to have the curl library binaries on your system to make the sample work. On macOS and Linux, it is usually included. On Windows, you can build it from sources (you'll need Visual Studio or Windows SDK Commandline tools). For more details, see the related blog post. Alternatively, you may want to consider a MinGW/MSYS2 curl binary.

To use header files, make sure they are generated as a part of the build process. For this, add the following entry to the build.gradle(.kts) file:

The new lines are marked with // NL. First, cinterops is added, and then an entry for each def file. By default, the name of the file is used. You can override this with additional parameters:

See the Interoperability with C section for more details on the available options.

Now you have the library and the corresponding Kotlin stubs and can use them from your application. For this tutorial, convert the simple.c example to Kotlin.

In the src/nativeMain/kotlin/ folder, update your Main.kt file with the following code:

As you can see, explicit variable declarations are eliminated in the Kotlin version, but everything else is pretty much the same as the C version. All the calls you'd expect in the libcurl library are available in the Kotlin equivalent.

This is a line-by-line literal translation. You could also write this in a more Kotlin idiomatic way.

You can see the actual output because the call curl_easy_perform prints the result to the standard output. You could hide this using curl_easy_setopt.

You can get the full code here.

For a complete example of using the libcurl, see the libcurl sample of the Kotlin/Native project that shows how to abstract the code into Kotlin classes as well as display headers. It also demonstrates how to make the steps easier by combining them into a shell script or a Gradle build.