This page describes the features of the legacy memory manager. Check out Kotlin/Native memory management to learn about the new memory manager, which has been enabled by default since Kotlin 1.7.20.

When it comes to working with iOS, Kotlin/Native's state and concurrency model has two simple rules.

The result of following these rules is that you can't change global states, and you can't change the same shared state from multiple threads. In many cases, simply changing your approach to how you design your code will work fine, and you don't need concurrent mutability. States were mutable from multiple threads in JVM code, but they didn't need to be.

However, in many other cases, you may need arbitrary thread access to a state, or you may have service objects that should be available to the entire application. Or maybe you simply don't want to go through the potentially costly exercise of redesigning existing code. Whatever the reason, it will not always be feasible to constrain a mutable state to a single thread.

There are various techniques that help you work around these restrictions, each with their own pros and cons:

Kotlin/Native provides a set of Atomic classes that can be frozen while still supporting changes to the value they contain. These classes implement a special-case handling of states in the Kotlin/Native runtime. This means that you can change values inside a frozen state.

The Kotlin/Native runtime includes a few different variations of Atomics. You can use them directly or from a library.

Kotlin provides an experimental low-level kotlinx.atomicfu library that is currently used only for internal purposes and is not supported for general usage. You can also use Stately, a utility library for multiplatform compatibility with Kotlin/Native-specific concurrency, developed by Touchlab.

The first two are simple numerics: AtomicInt and AtomicLong. They allow you to have a shared Int or Long that can be read and changed from multiple threads.

According to the rules of global state, global object values are frozen in Kotlin/Native, so trying to modify sd will fail. You could implement it instead with AtomicReference:

AtomicReference can be very useful when you need to share a state. There are some drawbacks to consider, however.

Accessing and changing values in an AtomicReference is very costly performance-wise relative to a standard mutable state. If performance is a concern, you may want to consider using another approach involving a thread-isolated state.

There is also a potential issue with memory leaks, which will be resolved in the future. In situations where the object kept in the AtomicReference has cyclical references, it may leak memory if you don't explicitly clear it out:

The following won't protect against duplicate values in the list if called from multiple threads:

You will need to implement some form of locking or check-and-set logic to ensure proper concurrency.

Rule 1 of Kotlin/Native state is that a mutable state is visible to only one thread. Atomics allow mutability from any thread. Isolating a mutable state to a single thread, and allowing other threads to communicate with that state, is an alternative method for achieving concurrent mutability.

To do this, create a work queue that has exclusive access to a thread, and create a mutable state that lives in just that thread. Other threads communicate with the mutable thread by scheduling work on the work queue.

Data that goes in or comes out, if any, needs to be frozen, but the mutable state hidden in the worker thread remains mutable.

Conceptually it looks like the following: one thread pushes a frozen state into the state worker, which stores it in the mutable state container. Another thread later schedules work that takes that state out. 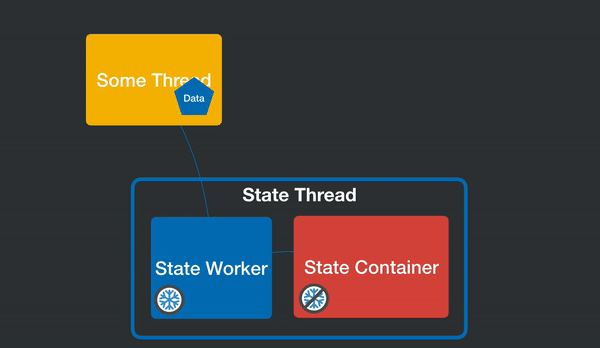 Implementing thread-isolated states is somewhat complex, but there are libraries that provide this functionality.

For simple values, AtomicReference will likely be an easier option. For cases with significant states, and potentially significant state changes, using a thread-isolated state may be a better choice. The main performance penalty is actually crossing over threads. But in performance tests with collections, for example, a thread-isolated state significantly outperforms a mutable state implemented with AtomicReference.

The thread-isolated state also avoids the consistency issues that AtomicReference has. Because all operations happen in the state thread, and because you're scheduling work, you can perform operations with multiple steps and guarantee consistency without managing thread exclusion. Thread isolation is a design feature of the Kotlin/Native state rules, and isolating mutable states works with those rules.

The thread-isolated state is also more flexible insofar as you can make mutable states concurrent. You can use any type of mutable state, rather than needing to create complex concurrent implementations.

Kotlin/Native has some more advanced ways of sharing concurrent states. To achieve high performance, you may need to avoid the concurrency rules altogether.

This is a more advanced topic. You should have a deep understanding of how concurrency in Kotlin/Native works under the hood, and you'll need to be very careful when using this approach. Learn more about concurrency.

Kotlin/Native runs on top of C++ and provides interop with C and Objective-C. If you are running on iOS, you can also pass lambda arguments into your shared code from Swift. All of this native code runs outside of the Kotlin/Native state restrictions.

That means that you can implement a concurrent mutable state in a native language and have Kotlin/Native talk to it.

You can use Objective-C interop to access low-level code. You can also use Swift to implement Kotlin interfaces or pass in lambdas that Kotlin code can call from any thread.

One of the benefits of a platform-native approach is performance. On the negative side, you'll need to manage concurrency on your own. Objective-C does not know about frozen, but if you store states from Kotlin in Objective-C structures, and share them between threads, the Kotlin states definitely need to be frozen. Kotlin/Native's runtime will generally warn you about issues, but it's possible to cause concurrency problems in native code that are very, very difficult to track down. It is also very easy to create memory leaks.

Since in the Kotlin Multiplatform application you are also targeting the JVM, you'll need alternate ways to implement anything you use platform native code for. This will obviously take more work and may lead to platform inconsistencies.

This material was prepared by Touchlab for publication by JetBrains.